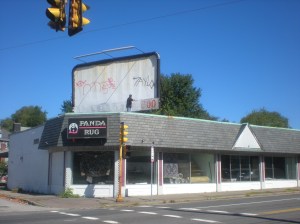 On September 26th, Victor Pap and a few North Weymouth residents met at Panda Rug on 3A.  If you haven’t noticed, that area (along with Sea St.) has been a major target for graffiti lately.  It’s disgusting and needs to stop.

Surprisingly, it didn’t take long at all to paint over the graffiti.  Hopefully the “artists” won’t see it as a blank slate.

I am hoping this picture shows hope and promise for a better North Weymouth in the future.  2 North Weymouth 3 year-olds even joined in the clean-up.  During the painting, one of them said “You aren’t suppose to draw on walls.  Only paper.”

Many thanks to Victor Pap for responding so quickly to the concerns of a few citizens in North Weymouth.  We need more residents to speak up and take action in our community.

Join or Renew Your Membership Here!

The NWCA is strong because its membership is strong!  Thank you very much for expressing interest in joining or coming here to renew your membership.

Click "Make a Donation".  After, choose the amount of years you want to pay for by selecting the appropriate amount: